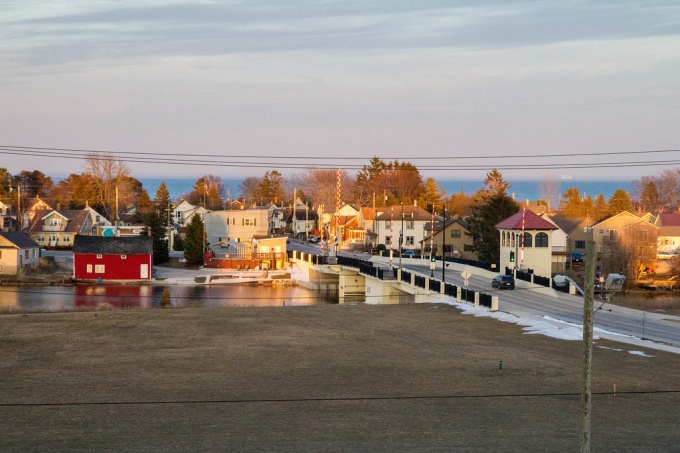 This is a view, taken earlier this year from Two Rivers City Hall, that many residents and visitors have grown accustomed to.  The community lost two major employers from the western shore of the East Twin Rivers in the past two decades with first Eggers Industries relocating its manufacturing facilities to a new plant north of town in 2005, and then in 2015 when the iconic smokestack of Hamilton Industries (nee Thermo Fisher Scientific) came down, leaving nearly 19 acres and more than 1,500 feet of waterfront property available for development.

This represents a nearly unprecedented development opportunity in any community, and certainly in a community such as Two Rivers.  It represents the most substantial and tangible venue for the community to consider its future.  The design weekend was privileged to have two design teams tackle parcels on either side of the 17th Street bridge with the direction to connect the community’s heritage with its promise.

The design concept presented here by Galbraith Carnahan represents the first opening of that conversation.

This Milwaukee-based firm was represented by principal Joe Galbraith and two talented designers in Nhia Lee and John Annis.  The team worked late into the evening on Friday and committed all of their energies Saturday to bringing forward another visionary and engaging design concept.

The rendering depicts the site as viewed from the southeast.  It is guided by three design principles. 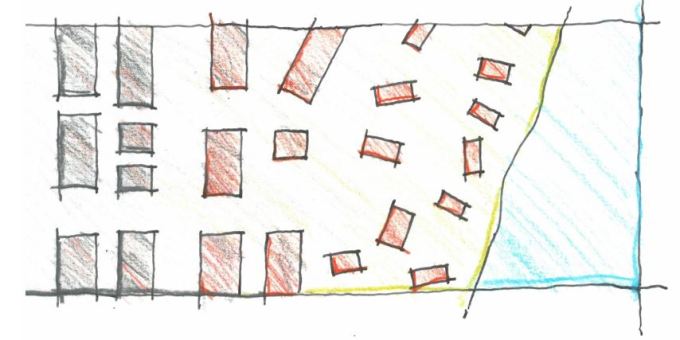 The first suggests a dialogue between the hard edge of the downtown streetscape as defined by Jefferson Street and the buildings of the former St. Luke’s Catholic Church, including the current Sepia Chapel and the softer, meandering banks of the East Twin River.  This is evident in the more regular alignment of the mixed-use buildings that line the street and the increasingly scattered townhomes and cottages that connect the site to the water.

The second design principle extends the first and also conveys the sense of the river’s movement to the site.  The design encourages active circulation throughout its public spaces.  This mimics the currents and eddies that define the river as it reaches its confluence with Lake Michigan.  This encourages visitors to wander and creates points for collision and connection.

The final design principle mimics and pays credence to the site’s topography.  The site slopes gently towards the river, rendering it difficult for a viewer to see the site’s edge looking east from Washington Street.  The design takes advantage of its elevation by placing its tallest buildings along Jefferson Street and then adding lower buildings in two tiers.  This again mimics the site’s natural topography and maximizes each building’s waterfront view.

A final view from the West Twin River shows the site’s orientation and proposed uses.  The bulk of the former Eggers Downtown site will be comprised of a needed stormwater retention pond, a transient dockage marina, and a series of single-family cottage-style homes.  The next level of the site extends further into the former Hamilton property and consists of two banks of two-story townhomes.  The final layer fronts Jefferson Street and includes three mixed-use retail/commercial/residential buildings including an optional hotel site or other large use.

The City has expressed significant interest in this site’s development and recently took steps to acquire the Eggers Downtown property.  This could accomodate the first phase of development, including the pursuit of state and federal funding support for marina development.

This represents another invitation to a conversation on Two Rivers’ future.  Does this represent the image of a community that we can see ourselves living in?  I invite you to consider this concept as others will be soon to follow.