We are pleased to present the fourth design concept for consideration in the Light Up the Lakeshore Design Weekend.  The property selected is again familiar to all of those who live in Two Rivers as the manufacturing plant alternately referred to as Mirro Plant #4 or the Eggers West Plant has stood sentry over the near south side for nearly a century.   The image above of the remains of the former drive-through rail receiving dock served as both the invitation and departure point for the design team at Abacus Architects much as it did the raw materials that produced so many of the goods that established the community. 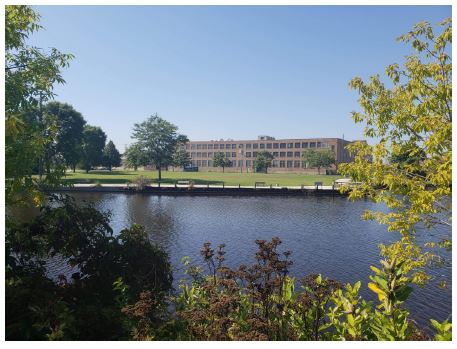 The site itself, which recently changed ownership, is one of two sites that the design team considered.  The other property was the former Mirro Plant #1 and was connected by the Canadian National railroad tressle bridge that still stands midstream in the West Twin River.  This site, currently referred to as the Burrows property serves at the balance of the site referred to in the firm’s master plan.

The design team was faced with a monumental challenge, no pun intended, in considering the sites’ collective potential.  The existing factory site encompasses more than 270,000 square feet and the two sites are more than thirteen combined acres of property.

The illustration above represents the initial master plan for the property.   The most significant proposed change is the demolition of the latest 1950’s era addition to the factory.  This was considered vital to the other proposed site uses as many have significant parking requirements established by code.  The master plan allows for either the development of surface parking to meet those requirements.

The master plan allows calls for a mix of public and private uses throughout the property.  The existing green space on the Eggers West site is re-envisioned as a public space and the railroad bridge is transformed as a pedestrian connection to downtown.  The Burrows lot is now home to two mixed-use residential spaces.

The potential use of the factory space is hinted at in the subtle proposed changes to its facade.  The design concept calls for doorways to be cut along the site’s eastern exposure.  This will serve as a public bazaar and facilitate the conversation between the building and its surroundings.

The design team further developed discrete floor plans for each of the plant’s three floors.  The first floor is primarily occupied by retail and restaurant uses with a variety of potential options envisioned in a flexible environment.  The retail operations would be facilitated by easy on-street and off-street receiving.  The design inspiration for this purpose is the public markets found in several communities, including the Milwaukee Public Market and the Cannery complex in Green Bay. 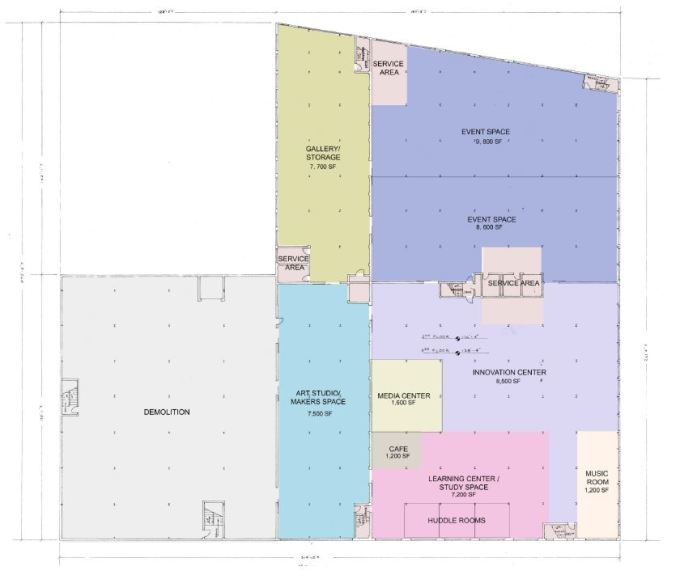 The second floor plan extends the dialogue of what is possible in the site to a consideration of a blend of public and private uses.  The eastern half of the floor contains a series of largely public uses ranging from a community learning and makerspace to an innovation space or open office environment.  The western half of the floor is occupied by two event spaces and a gallery that could facilitate a variety of uses and take advantage of the wide spans and natural light that begins to dominate the building at this elevation. 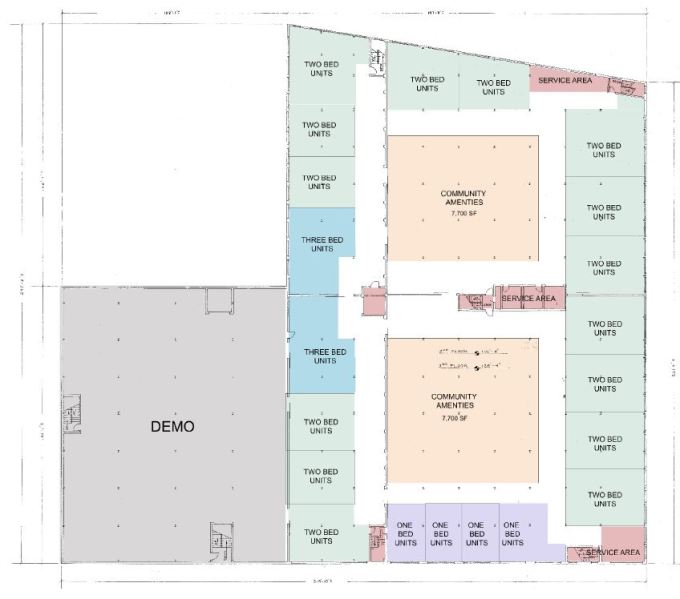 The top floor of the factory contains the most private uses in a series of apartment or condominium units.  These are oriented to again maximize the extensive water views afforded at the site.  It is further suggested that the development and sale of these units may be sufficient to finance the development of further uses throughout the site.

Our departing view of the site brings us across the West Twin River to see the facade of one of the two multi-unit buildings proposed for development on the Burrows site as well as related public space.

The development proposed here is both grand in scale and echoes many of the common themes found throughout the other concepts presented thus far of the need for additional community gathering and entertaining spaces as well as residential options that maximize the waterfront.  While it is unlikely that each of these and the final property will develop in their specifically-proposed directions, it is easy to see any combination of these properties developing in similar ways as the community considers its future.

We wish to again thank Abacus Architects for their invaluable contributions to this conversation.  We now welcome the community to the table.