We are pleased to share the final design concept submitted as part of the Light Up the Lakeshore Design weekend September 13-15.  We have decided to share this concept, as envisioned by the team at Kahler Slater last as we feel that it exemplifies the common themes of each of the designs from this weekend.

It also presents a vision for one of the most iconic and discussed development sites in Two Rivers.

This was one of the lasting images of my childhood.  Many afternoons were spent after school at J.F. Magee Elementary or L.B. Clarke Middle School sitting with my mother as we waited for my father, who worked for Hamilton Industries for forty-one years, to come out of work.  The ebb and flow of our lives were dictated around work schedules and overtime,  Many of my earliest sports memories include stories of my father’s bowling exploits with his co-workers at Rudy’s Lanes.

The factory and its iconic office and smokestack no longer exist, with the last vestiges of the site demolished in 2015.

The video above points both to the deep legacy of the company and the site as well as the potential that the site now holds.  The redevelopment of the Hamilton’s site is something of a white whale within the community’s discourse; something discussed in grand and aspirational terms while few believing that it will occur in the near future.

The decision to include the Hamilton’s site in the design weekend was made during an especially stormy afternoon conversation in the City Council chambers.  The site is especially challenging both due to potential environmental concerns as well as its private ownership.  Neither of these necessarily makes the site an unlikely redevelopment candidate.  Rather, they merely increase the degree of difficulty doing so.

We have already discussed the concept presented by Galbraith Carnahan for the portion of the property north of 17th Street.  We will now consider the proposal for the south portion entitled the Confluence.

The master plan for the site hints at the ambition of the proposal.  This is one of the two defining characteristics that we found throughout each of the concepts produced during the Design Weekend.

The site plan calls for the construction of four unique buildings and the establishment of a transient marina at the tip of the property.  The architects concede that the dockage is likely the least feasible of all improvements due to the turbulence and currents in the harbor at the confluence of the East and West Twin Rivers.

The site fills the space with a variety of public and private uses with considerable attention given both to the establishment of public gathering spaces and a visible connection to the water.  This relates to the second common theme of each of the design concepts — they all include a sense of gathering.

This rendering shows both the focus on public space as well as three of the primary uses of the development.  In the far right you can see a series of multi-family condomuniums.  The center of the image shows a multi-unit apartment complex that may appeal to young professionals and seniors.  The builing at left is a multi-purpose restaurant and retail space designed to meet the needs both of those residents as well as residents and visitors to the city. 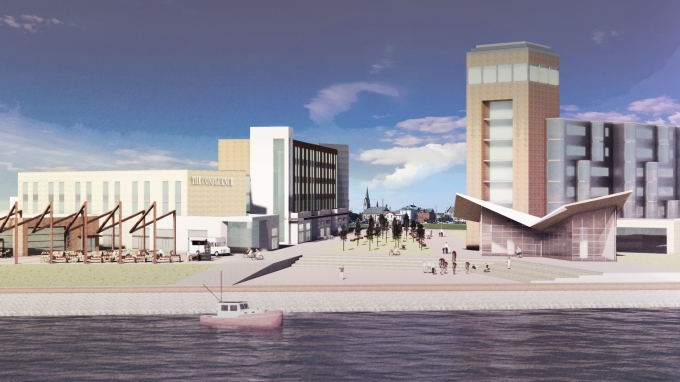 The site has a strong connection to the water as the development gently slopes to the riverside.  This view also affords us a glimpse at a hotel development that represents the final built environment on the site. 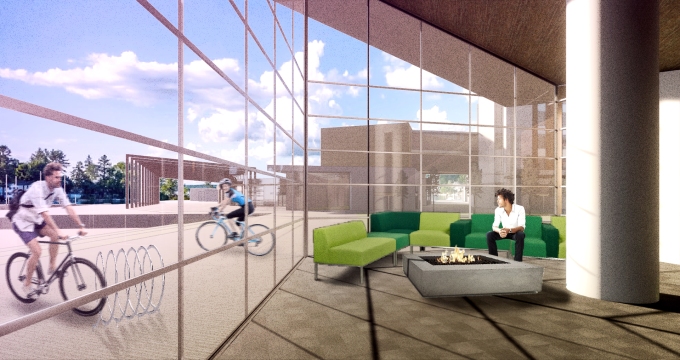 The design concept also envisions the site as one faciliting live, work, and play.  Several potential office spaces are included in the site’s variety of uses and the master plan calls for integration and extension to the Mariner Bike Trail. 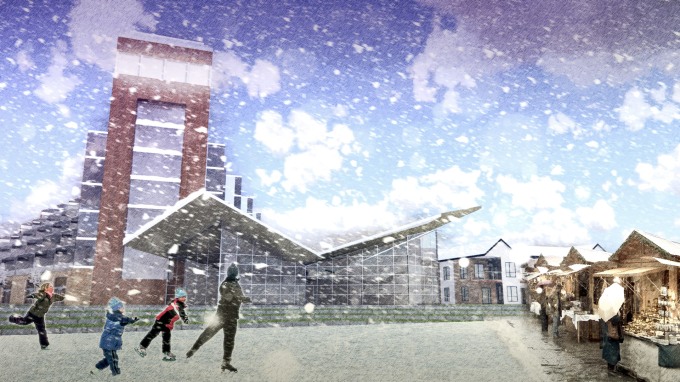 The design concept further considers the site as one that can be accessed year-round.  The public square includes the incorporation of a splash pad for summer use and conversion to a skating rink for winter enjoyment.

It is important to note that the scale and orientation of the design concept presented here does not consider nor does it incorporate the Cobblestone Hotel that is currently in development across Jefferson Street.  It is assumed that the orientation of the buildings in this concept would be adjusted to allow the hotel to maintain as many of its water views as possible.

At first blush, the design concept presented here is the one that is least consistent with what we currently find in Two Rivers.  It is both more modern in scale and scope than what exists and one can assume that the potential development budget to execute this vision would far exceed anything previously considered.  Some who have reviewed a preliminary draft of the design team’s presentation have suggested that this development may be better suited for a larger community.

I would contend that the ambition of the Confluence speaks to what Two Rivers as a community could be.  Each of the five design concepts presented over these past several weeks represents developments that are both feasible and appropriate for their intended sites.  While the community may not have the assets to facilitate a development of this scale today, I would suggest that the execution of many of the other development concepts may grow both market interest in the site as well as community resources to facilitate the Confluence.

This is the final concept that was developed during the Light Up the Lakeshore Design Weekend.  It is a departure point, of sorts, as we consider next steps, and a clear invitation to a conversation.  I invite you to consider, discuss, and dream.